RT vs. Pro? Which Is The Best Choice?

A couple of articles on ZD Net this week finally pushed me over the edge (this seems to happen to me a lot). Because Microsoft elected to create two versions of its tablet, the Surface RT and the Surface Pro, pundits are constantly harping on the difficulty of the choice and the difference in price. From my perspective, this is more about the difficulty some folks have in stepping away from a "full" version of Windows to the mobile and thus somehow more crippled version.

This might make sense as a debate if every tablet vendor offered the same choice. To put a very fine point on it, where is the iPad "Pro" model that runs OS/X? There isn't one, of course, and there isn't likely to be. Microsoft is the only company that offers a mobile and "full" version of the tablet and I think the company's decision to go that way makes a lot of sense.

The debate also might make sense if tablet sales in the iPad space weren't so brisk. Then one might question why Microsoft would canibalize laptop sales with a "crippled" device. But sales are brisk. The tablet as so well conceived by Apple is a compelling device, so compelling that you almost instantly want one once you've tried one.

An obvious question, then, is why did not Apple equip its phones and tablets with OS/X? The answer lies in the RT vs. Pro equation - it takes more resources, including and especially battery power, to run Windows and OS/X than it does to run Windows RT and iOS. Tablets are constrained devices in terms of size and weight, which creates limitations on how much battery can get crammed in. Just the battery in my laptop weighs 20 ounces; the current iPad is 23 ounces total.

Here's my take. I think that if Apple had its current iPad along with an iPad "Pro" that ran Mac OS/X, no one would think it odd at all. They'd praise Apple for bringing the Mac to the iPad form factor! But when Microsoft does the same thing, it's confusing (or worse, misguided). 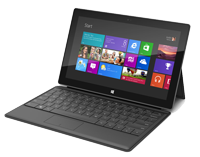 And this confuses me. I look at the Surface RT and I see a perfectly fine tablet for browsing the Web and a very good tablet for handling email (Outlook Web App is great - check out Outlook.com). Then, of course, it comes with the Microsoft Office apps for Word, Excel, and One Note. No, they're not the full-bore applications that come with Microsoft Office for Windows but they are head and shoulders above whatever is on the iPad or Android tablets and phones. They are just the ticket for anyone with a heavy investment in MS Office documents, like me.

If there is any room for debate, it would be about the Surface Pro. I've said before that I thought Microsoft did a pretty good job with the specs on the device. I've held it and tried it for a while. It's heavier than a typical tablet (again, what can be crammed into the available space) but it runs Windows, so it runs any Windows application or app. In my professional life, I could see carrying the Surface Pro around instead of a laptop, especially because it has a mini-display port that would allow me to connect to display systems (e.g., projectors) in conference and meeting rooms. It would be very compact, even with the necessary Type Cover.

If a pundit needs to compare the Surface RT to something else, the choice of the Surface Pro is wrong. The proper comparison is with iPad, Nexus, Kindle, Nook, or other tablets of this ilk. Then complain about the Surface RT being inadequate in some way.

Today's news brings Microsoft's fire sale pricing on the Surface RT, to $349. Let me ask this. If you compare the $349, 32GB, WiFi Surface RT to the $499, 16GB, WiFi iPad, which would you choose? Unless there were some compelling apps on the Apple side that made the difference, it would be hard not to seriously consider the Surface. In fact, even at the original price of $499 it would be hard to ignore the Surface. Microsoft is probably using the sale to clear inventory to make room for this fall's models, which we should start hearing about soon. But if you're willing to buy an iPad today, I think you'd be willing to buy a Surface RT today. (Did I mention that the RT comes with the Office apps?)

I've written before that the trade press seems to have it in for Microsoft. I think the manufactured debate about the differences between the RT and Pro versions of the Surface takes things to a new height. It's ridiculous. It's poor journalism.

Don't be fooled. Check out the Surface RT and compare it to apples, so to speak. If you decide on an iPad or some other tablet over the Surface RT, more power to you. Just don't let anyone tell you that the Surface RT is some sort of poor cousin. To anything.

A total of 59 related articles were found. See them all...