In June, the Blu-ray Disc Association (BDA) announced a new standard for the Blu-ray format. The new BDXL format will support up to 128GB of storage on a 4-layer disc or 100GB on a 3-layer disc. Several media manufacturers, including Sharp, Verbatim, and TDK, announced availability of the media starting soon.

BDXL is not compatible with existing Blu-ray players, thus new hardware will be required as well. BDXL is a write-only format; that's okay, as I consider write once more appropriate for archival purposes.

I have often said that the 50GB Blu-ray was desirable as a backup system. In theory, this announcement of a more than doubling of capacity should reinforce that opinion. However, my enthusiasm for Blu-ray is waning. Why? Price.

Ignoring the fact that the cost of players has not dropped as fast as I thought or as CD and then DVD writers once did, the media cost remains extremely high. For example, I can buy brand name DVD+R (single-layer) discs for about 40¢ each in quantity, which translates into about 10¢ per gigabyte. By contrast, a Sony 25GB BD-R disc costs $20 at Staples - 80¢ per GB. This high price has held for a very long time. Perhaps the higher-capacity BDXL will force the 50GB BDR price down, but the gap is so big that I doubt it will drop by much. The 100GB BDXL media will surely cost more.

It gets better. Double the size of the drive to 500GB and the cost per GB drops to 11¢! That's right in the sweet spot for DVD.

I'm having trouble seeing Blu-ray as a good option for backup given these numbers.

The difficulty with hard drives is that they are bare devices at the price I mention above. If they are placed in an enclosure, the price rises by $30. That still keeps the cost/GB lower than Blu-ray. Luckily there is another option. A relatively recent product category is hard drive "docking stations" that can accept a variety of types of drives and connect via USB. The best of the bunch support either USB 3 or eSATA for high performance. They are easy to use - just slip the bare drive into the slot and go. 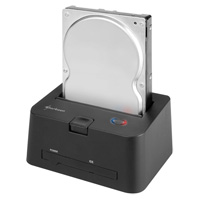 My favorite product in the category is the hard-to-find Sharkoon QuickPort Combo eSATA. I like this docking station because it handles both SATA and the older PATA (IDE) drives, can dock both 2.5" and 3.5" drives, and can connect with either USB 2 or eSATA. The product is now listed at Newegg.com for $50 although as of this writing it is not yet in stock.

I think the docking station concept is good. The vertical orientation of the inserted drive means that gravity will maintain a good electrical connection. Some other devices in this general category are little more than cables, which I'm quite sure work very well but may be less desirable. I have seen the cable style device for as little as $25.

Keeping bare drives around is not a good idea. Vendors are ahead of the curve on this; search for "hard drive storage case" and you will find many options. One is from WiebeTech, an anti-static plastic storage box for $7, a small price to pay.

The failure of optical media to drop to reasonable prices combined with the incredible capacity increases for hard drives and the attendant price drop of lower-capacity drives results in hard drives being the best best for backup. Forget about Blu-ray for computers.

Watching Moore's law collapse for hard disk drives is not only amazing but fun (because it's collapsing in our favor).
September 6, 2009 (Hardware, Storage)

A total of 10 related articles were found. See them all...