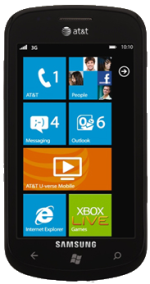 Microsoft is a company that has been meeting a huge challenge reasonably well for the last 15 years. If you're a PC manufacturer, you can build a machine that complies with a reasonably sane list of hardware requirements and Windows will run on it. Not only that, Windows on machine A from vendor X will look and work just like Windows on machine B from vendor Y, even if the two vendors customize Windows in some ways.

It's easy to forget about this; we just buy Windows PCs without thinking about it. Apple, on the other hand, builds a matched set - Mac computer and OS X software. Nobody else can build a Mac and nobody else can build OS X. It's a closed development environment.

Microsoft did not have that luxury when it entered the phone market years ago. Following its cultural heritage, it made core software and allowed the handset manufacturers to have their way with it. That has changed.

It's easy to see. Despite physical variations on a vendor-by-vendor basis, all the phones present the same user interface and the same core functionality. For contrast, visit the Samsung site and take a peek at Windows Mobile 6.x phones. There are seven of them as of this writing, with dramatic differences.

I believe Windows Phone 7 gives Microsoft the edge it needs to compete more fully and directly with Apple and Google precisely because Microsoft is now clearly holding the handset vendors' feet to the fire. What this can do is change the sale dynamic so that a potential customer is interested first in the fact that the phone is a Windows phone and second in which hardware package it is delivered. This is precisely the situation with PCs - you decide you want a Windows PC and then look at Dell, HP, and others.

I'm with Verizon at the moment, so iPhone has not been an option for me until recently. I'm using a Palm Centro now primarily because I've been using Palm devices since 1998 or so and I have a small investment in apps. Frankly, iPhone is not enough of a pull to get me to switch. But the notion that I might have tighter integration with my primary Windows PC and its Office suite is of compelling interest, and the fact that Windows Phone 7 is more universal than Windows Mobile has been gives me some confidence in the future. I think this is a pretty big deal and very good news for Microsoft.

Even so, it will probably take one more generation for me to take the leap. For all its good integration with Windows, the phone is not yet capable of handling my email account. Outlook Mobile can handle the major public providers (Live, Gmail, Yahoo) plus Exchange, but my account is a POP account associated with my Web site hosting plan. I've got a lot invested in the email address, so this is a difficult problem. (Microsoft needs to take a page from RIM's BlackBerry handbook.)

But my problem will not be a problem for many, many others.

A total of 37 related articles were found. See them all...