A few years ago I took my last Windows 7 system out of service and now run Windows 10 on my primary PCs. Red Alert 2 worked on that older system, although it had stopped at some point and I never figured out why.

As I was going through my old hard drives a few weeks ago I came across one that booted Windows 7 and contained Red Alert 2. It made me wonder it I could get Red Alert running on a PC by booting from that PC, so I decided to pull the Windows 10 hard drive from an old Dell Vostro 220 and boot from the older hard drive.

I got a surprise. Red Alert 2 ran.

Overjoyed, I played a few times. Meanwhile, Windows 7 was busy muttering to itself "Say, I haven't been run in ages and golly, I've got tons of updates to download."

My normal instincts being what they are, I noticed the update process and let it run. My plan was to get 7 as up to date as I could.

I got another surprise. Red Alert stopped running.

It hit me like a freight train that this is exactly what happened before when RA2 didn't run. But I had gone through a long spell of not playing the game at all, so I didn't notice a cause and effect. This time was different. One day RA2 was running and the next not and the only possible culprit was Windows Update.

My first attempt to recover was to roll Windows 7 back to the latest restore point that predated my resurrection of the hard drive. That turned out to be a mistake because, again, Windows Update just did its thing. Again, I rolled back to the restore point but then immediately and completely disabled the Windows Update Service. That did the trick. Here's a screenshot of RA2 running in 1680x1050 mode: 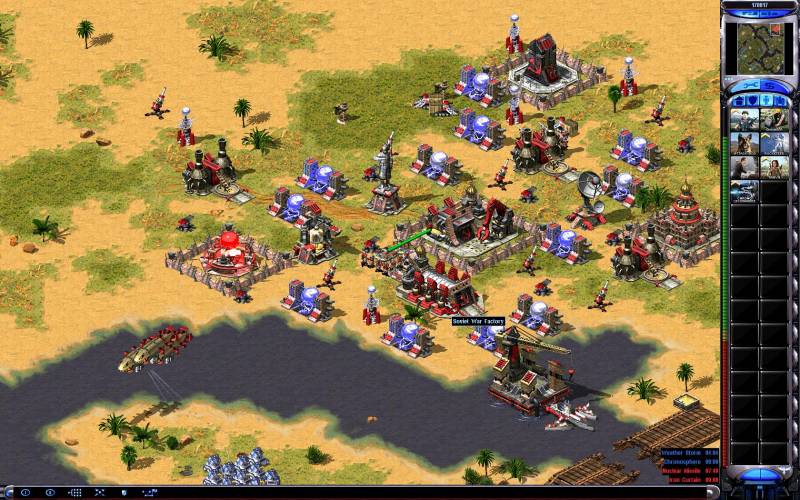 The version of Windows 7 needed to run Red Alert 2 is Windows 7 Service Pack 1 version 6.1.7601.17514 or earlier. This translates into Build 7601. My system runs the Pro edition; I presume this will also work with the other editions, such as Windows 7 Home. If this version is allowed to update itself, RA2 will not run.

I am using the Vostro 220 for other purposes; it normally runs Win 10. Needless to say, I can't be swapping hard drives all the time. My plan is to build a SATA power cable with a gang switch in the middle so I can enable whichever hard drive I like. I have a place to mount that on the front panel (the Vostro has one of those sliding covers over one of the 3.5" bays and the switch will fit behind it (I think). Here's a good article on building such a cable.

The natural criticism of this approach is that it requires a separate PC. For me that works very well. I have a KVM switch allowing me to share my keyboard, video, and mouse with four PCs. The Vostro is in that mix, so the way I work hasn't changed. Such a solution may not be convenient for many, which is perfectly understandable. It's a zero-cost solution for me because I already own all the pieces.

This is a far easier solution than banging my head against the wall trying to find some way to virtualize or just plain run RA2 in Windows 10 (and later). Because the only thing I will use the Vostro for when booted from the RA2 Win 7 drive is playing the game, and because I don't play over the Internet, the absence of Windows updates will not present a threat. And even if something does wipe out that drive, now I know how to recover.

I have missed Red Alert 2 and am very glad to be able to play it again.