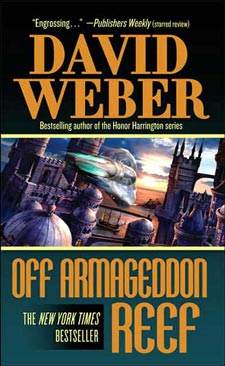 When I was younger I read a huge amount of science fiction. Along with mysteries, Sci-Fi was for a very long time my favorite genre. Then over time my reading slowed and eventually stopped. I don't know why for sure; I kept reading, just less and less Sci-Fi. For the last 20 years, I've read very little.

About two years ago, I was wandering through Barnes & Noble looking for something new to read. While perusing the bargain books, I spotted Off Armageddon Reef and, for reasons I can't recall, picked it up. Something clicked; I added it to the pile. With several new books to read there was no particular urgency, so it was several weeks before I finally got around to reading it.

I could not put it down.

The author, David Weber, spins an epic, global, geopolitical, historical, social, and military tale that is fascinating from start to finish. It is unusual to read an author whose work is not only broad but also incredibly deep. Weber's naval knowledge rivals anything I've read from other authors. But Weber is not just an excellent Sci-Fi writer, he's an excellent writer, period. His dialog is crisp and his action compelling. Even the longer explanatory or connective passages hold the reader's interest and imbue an even greater richness of experience.

The plot line of Off Armageddon Reef is intriguing. The planet Safehold is a refuge from a ruthless species known as the Gbaba. Rather than risk another spacefaring civilization springing up and becoming a threat, at the first sign of high technology the Gbaba simply wipe out every vestige of that civilization. Through a ruse, Safehold is founded by the remains of Earth's civilization and set up without technology and with strict rules against it. This juxtaposition of high technology with a pre-electrical society is at every turn fascinating. One would not ordinarily put 1700s Earth and Star Trek in the same context but this is what Weber does brilliantly.

By Schism Rent Asunder is the immediate sequel to Off Armageddon Reef. It is every bit the equal of the original. I have just acquired #3, By Heresies Distressed, published in 2009. Earlier this month #4 in the series appeared, A Mighty Fortress.

Having thus read my first work by Weber, I wondered about his other novels. I quickly found the Honor Harrington series beginning with On Basilik Station. Reviewers have called this a "space opera" and I suppose that is consistent with the way some SciFi has been viewed. However, such a superficial view misses Weber's incredble command of the human species, its history, and its politics. Within days of finishing Reef I had acquired the first books in the Harrington series and within a matter of 3 weeks had read them all. They are terrific. After a five-year lull, Honor will be with us again in June's Mission of Honor. In preparation, I've decided to read the first 11 again.

Off Armageddon Reef's sprawling story should appeal not only to SciFi fans but also to lovers of military or historical novels. I think the writing is superb and that the novel should also appeal to the more literary among us.

A tiny company in Hawaii solves a problem neither Microsoft nor SAP has addressed.
August 17, 2010 (Excellence, Programming, Software)