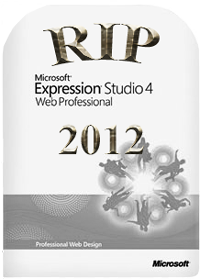 Today's news that Microsoft's Expression family of products is no more should not be a surprise. Based on normal product cycles at Microsoft, there has been no news about Expression Web (EW) in some time, well past the point at which beta testers would have been getting a look at the next version. The Expression Web developer's blog has lain fallow for a year. Key personnel left Microsoft last year. It's almost as if the news is nothing more than confirmation of something suspected for months, almost anticlimactic.

I know all that, but it was still a jolt. Microsoft is one of the most important makers of development tools in the world and it has decided not to have a general-purpose, standards-based tool in its portfolio. In its announcement Microsoft implies that with HTML 5 and CSS 3, the role of Expression Web is subsumed by its main development platform. That much is true, but for the moment at any rate there is no indication that Visual Studio will absorb the one thing from EW that clearly sets it apart - support for non-Microsoft server-side languages, like PHP. I have predicted that Microsoft will never integrate PHP into Visual Studio and I'm still standing by that.

I acknowledge that there are changes coming in the way that Web sites are built. It may well be that the portion of the market served by Expression Web is growing smaller. For example, there are an increasing number of online services that allow people to build small, simple sites using WYSIWYG editing and without requiring the purchase of software. This was, in fact, the precise market addressed by FrontPage when it came into being over 15 years ago. These "site builder" services are now available with almost every hosting plan. I worry about this every day because I'm targeting the very small business market, exactly the folks who might want to try a DIY approach. That's one reason I've expanded my offering to make my solution more attractive to those folks, to help them see the value add that I can offer. But the site builder approach is certainly winning customers.

Despite my disappointment at the demise of Expression Web, there is no emergency. While I'd like to see the various problems in Expression Web 4 fixed, they are not so great as to prevent me from using the product indefinitely. I will continue to do so. My sites are not built to depend upon any Microsoft technology, so I can take my time to explore other tools as I consider a replacement. Adobe's Dreamweaver is more expensive but it offers one feature that I would miss otherwise, Dynamic Web Templates.

In a move I consider surprising, Microsoft has decided to make Expression Web 4 and Expression Design 4 available as free downloads. Although functionally identical to the paid versions, the freebies will not include support of any kind other than community support. I presume the Expression forums will continue although this is not yet clear. The paid versions will remain supported through their defined life cycle, details of which are available on Microsoft's site.

While I don't need to take advantage of the free offer, there is one piece of good news in this announcement. In an earlier article, I commended Microsoft for its support of Windows MetaFiles in Expression Design. There are still tens of thousands of images in WMF format out there and Expression Design is the only tool availalble from Microsoft that can read them. I consider that good news because Expression Design can export images in JPEG, PNG, or GIF format from the WMF originals and of course the vector image can be saved in a .design file. Sadly, the demise of Design also means that Microsoft has another dead file format on its hands, that same .design vector image format. Still, if you so much as touch a WMF image, avail yourself of the free Expression Design download and hang onto it.

Aside from that, the loss of Expression Web is a sad moment. The FrontPage/Expression combo had a 15 year run. Even though I still think there is a place for the product, Microsoft obviously does not, or at least not one with a satisfactory business model.

A total of 49 related articles were found. See them all...